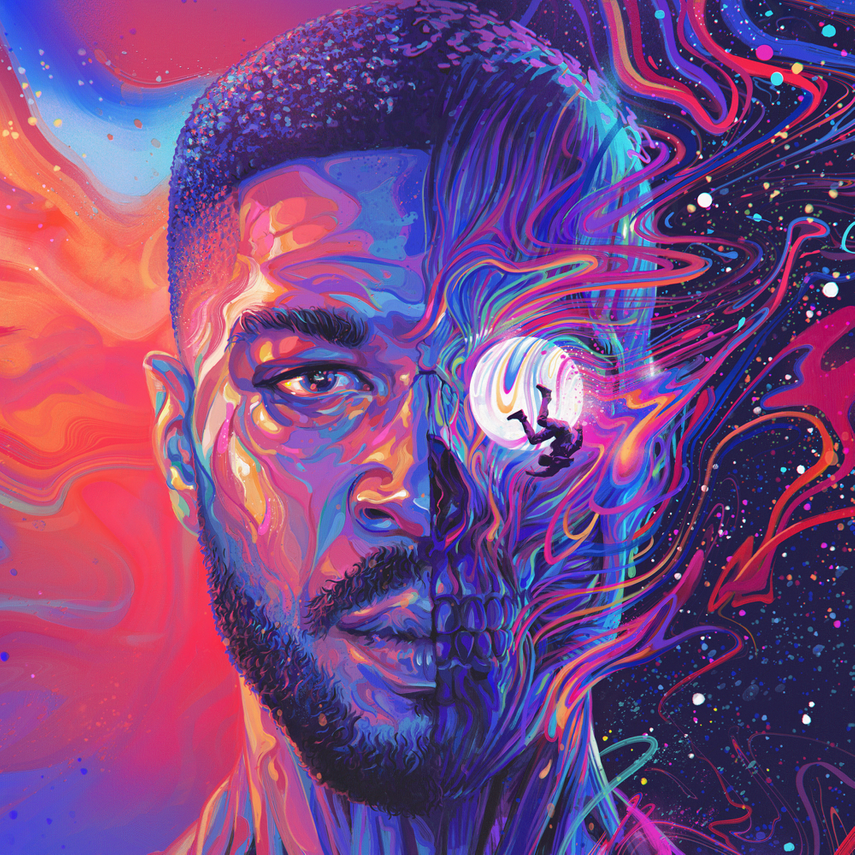 Kid Cudi – She Knows This

If you’re of a certain age, the first Man on the Moon, from 2009, probably meant something to you. Maybe you took your first bong rip while Kid Cudi chanted “I got 99 problems and they all bitches.” Or maybe you sent your middle school crush a link to “Cudi Zone,” and they responded with, “Your taste in music is sick!” Or maybe you gloomily stared out of your bedroom window and repeatedly played “Day ’N’ Nite” hoping one day you could move out and go post up on a Soho street corner in a Bape hoodie. Cudi’s music was there for a lot of transformative experiences. And even though he has hardly released any memorable solo music in a decade, he’s still seen through nostalgia-tinted glasses with hopes that one day he’ll change lives again.

On the album, the old crew is back—Dot Da Genius, Mike Dean, Plain Pat, Emile Haynie, and even Evan Mast of Ratatat—and some new faces have been added into the fold: Most specifically Take a Daytrip, the beat-making duo who show up when the major Atlanta-based producers are too busy. To make the album seem more important, it’s split into four acts and attempts to follow a loose concept about trying to defeat his demons and find peace. Part of what made Cudi’s music appealing in the first place was that he was an everyman. His stories about how struggles with depression and loneliness affected his relationships were detailed enough to be personal but also vague enough to be easily applied to anyone’s life. That’s not the reality anymore, and Cudi doesn’t appear to realize it.

When he’s not trying to be relatable, Cudi excels. “Girl is tellin’ me she don’t know what she want/Lotta demons creepin’ up, they’re livin’ underneath,” he raps with malaise on the album’s best song, “Tequila Shots,” rattling off a snippet from his life instead of attempting to capture the zeitgeist. Over this familiar-sounding Dot Da Genius and Daytrip beat, his tone catches the perfect balance, too, not too humdrum or overly excited, which is usually the case for him.

The worst thing that has happened to Cudi, musically speaking, is the time he’s spent hanging around Travis Scott. On “Damaged,” the hollow arena-ready production, one-note croons, shrieking ad-libs, and an underwhelming drop check off all the boxes of a record generic enough to fit on Jackboys. The same could be said for “Show Out”; Pop Smoke’s verse sounds as if it was never meant to be used, the drill-influenced beat is like when fast fashion steals runway designs, and Cudi’s spirituality is shallow. Cudi seems to think he’s making records the crowd at Rolling Loud will eventually moshpit to, but it’s probably more likely to end up at dinner parties hosted by Virgil Abloh.

But even when Cudi pauses the rage, Man on the Moon III is no better. If it wasn’t real, “She Knows This” would be known as a lazy parody of a Cudi song: It starts off with a Michael Cera sample from Scott Pilgrim and ends with Cudi using vocal manipulation techniques that should have been retired after the My Beautiful Dark Twisted Fantasy sessions. The second half of the album hits all of Cudi’s clichés: “The Void” has the lifeless hums; “Lovin’ Me” has the empty-hearted collab with an indie darling, this time it’s Phoebe Bridgers; “Elsie’s Baby Boy” has the half-assed singing on a miserable-sounding guitar sample that has plagued almost every Cudi record after Man on the Moon II.

And though it’s admirable to hear Cudi open up about his struggles with mental health and addiction, it doesn’t automatically make the music worthwhile. Cudi croons, “Say, ‘I’m waitin’ to die,’ I cry/Many nights I spent gettin’ fucked up, livin’ a lie,” on “Mr. Solo Dolo III,” a sequel to the Man on the Moon standout, but his flat vocals and plodding production just make it underwhelming. If anything, “Mr. Solo Dolo III” is only memorable because of its title, which like too much of Man on the Moon III is coasting on a legacy built a lifetime ago.

“Tequila Shots,” produced by Dot Da Genius and Take a Daytrip, sounds like a surge of cosmic energy. The tempo is fast, the drums are intense, and the song doesn’t relent. Cudi’s lyrical approach is aligned with the first two Man on the Moon albums, with rhymes about “demons creepin’” and “serenity,” but “Tequila Shots” refuses to be anything besides a banger. It’s a move the Cudi of yore would’ve rebuffed.

“I feel like he evolved. He wouldn’t have rapped on beats like that maybe six years ago, like 100 percent,” Dot Da Genius, Man on the Moon III’s executive producer, says over a Zoom call. Dot Da Genius provided Cudi with his first hit, 2007’s “Day ’n’ Nite,” and has been one of his most consistent collaborators and friends since the beginning of his career. “He opened up during this whole time period and just kept an open mind, and he killed it. I think he gave a stellar performance on all the records.”

The MOTM 3 creators divided the album into four acts: Return 2 Madness, The Rager, The Menace, Heart of Rose Gold and Powers. The first half features high-intensity beats for Cudi to rap over, while the latter half is more melodic and attuned to the first two albums.

“I think what’s different is on previous Man on the Moons, you would’ve got hit with a more introspective vibe earlier on in the album and then this album, like I said, Cudi wanted to come out swinging,” Dot says. “So for like the first six, seven tracks, right up until ‘Show Out,’ it’s mainly all energy.”

In retrospect, it’s hard not to see the Man on the Moon series as a creative prison. Those first to albums codified the Kid Cudi sound—downtempo, haunting ballads and emotional screeds about addiction, death, and depression—for himself and a generation. But as the myth of Cudi rose, so too did his knack for rapping. The heavenly hums and melodies stayed, but the bars were taken out back and given a couple of symbolic rounds to the head. Once you make an album that an entire age group elevates to mythical status, how do you escape from those confines? The answer for Man on the Moon III: The Chosen was to unify Cudi’s divergent skills and refine it for a new era.

Cudi’s resurgence as a rapper is partially due to the update of Man on the Moon’s sound. David Biral and Denzel Baptiste, the duo behind Take a Daytrip, were in high school when the first Cudi records were released. Over the next decade, their irreverent melodies and chest-rattling drums defined viral hits like 2017’s “Mo Bamba” and 2019’s “Panini.” When Biral and Baptiste first began working with Cudi, he asked them to brainstorm what his own version of “Mo Bamba” might sound like. Instead of the wild orchestral flourishes or the ornate compositions of the first two Man on the Moon projects, the Take a Daytrip and Dot Da Genius beats that anchor the project have a straightforward brilliance. While the melodies still have celestial flashes that harken back to Cudi’s obsession with space, the drums are heavy and intense.

“Our first moments of hearing the Cudi hum, hearing him think of the words, and then actually sing,” Biral says. “The Cudi rap flow is just, he has his own world when it comes to the way that he raps. And I think just for us working with a legend at the level as Cudi for when we were experiencing some of these moments for the first time was just like, ‘Oh my God.’”

Across Man on the Moon III, Cudi and Co. make incremental tweaks to the Cleveland rapper’s more rigid formula and give it a sense of propulsion. His spiritual successors—Travis Scott, Juice WRLD, Lil Uzi Vert—spent a decade shaving down the baroque bombast of those early G.O.O.D. Music releases into something simpler and more indebted to the immediacy of Atlanta’s trap music. On songs like “Another Day” and “She Knows This,” Cudi layers his verses with ad-libs, and his vocals sound more distorted and robotic than ever.

Cudi reunites with his key production team for much of the album: Dot Da Genius, Take A Day Trip, Plain Pat, Emile Hayne and the incomparable Mike Dean, the latter known largely for being Kanye West’s music director. The fabulous five’s fluorescent soundscapes, airy dimensions and emotive medleys couldn’t be more Cudi if they tried. Other producers who lend their services include E*vax (Evan Mast of Brooklyn electronic duo Ratatat) and WondaGurl, while Cudi even manages to pull Finneas away from work on the burgeoning uber-producer’s sister Billie Eilish’s new album for the dreamy love ballad ‘Sept. 16’.

The album’s crown jewel lays at the feet of ‘Mr. Solo Dolo III’. A continuation of previous instalments (parts one and two appeared respectively on 2009’s ‘MOTM: The End Of Day’ and 2013’s ‘Indicud’), the track sees Cudi delve into the darkness once again, swimming through waves of adversity, manoeuvring through mental health obstacles. His isolated state leaves you breathless. But the mettlesome drum kicks and courageous keys instil hope, keeping the sense of progression alive, even when he proclaims: “I don’t need nobody.”

where can i listen Kid Cudi Man On The Moon III: The Chosen

where can I download Kid Cudi Man On The Moon III: The Chosen mp3